What are you looking for?

Tell us what you're looking for...
Want to Run Your Own
My Guide Website?
Find Out More

An entire noisy nation, warmly welcoming us into their lusciously green and incredibly wet country.

There’s an old Irish saying, ‘to kiss the blarney stone’; a mystical stone and popular Ireland attraction believed to imbue whoever kissed it with the art of conversation and flattery.  Well, I don’t know much about that, however, what I do know is that the Irish didn’t just kiss it, they swallowed it whole. When they’re not talking, they’re singing; if they’re not singing, they’re joking, if they’re not joking, they’re dancing. And, no, I am not referring to the mythical little green people; I mean the real, live, locals. An entire noisy nation, warmly welcoming us into their lusciously green and incredibly wet country.

But, alas, I am getting ahead of myself. Let me return to the very start, where all of this Celtic craziness first began.

Assigned by My Guide with the loaded task of road tripping across Ireland, with little more than my loving fiancée and some misguided trust, I was ready for an adventure. However, after seeing the state of Will on return from his whirlwind weekend in Slovenia, I was a tad apprehensive to say the least. Set upon a belligerent quest to complete a series of, quite frankly, heinously embarrassing challenges- thanks, My Guide - Alex and I set off on our three day road trip from Shannon to Dublin. 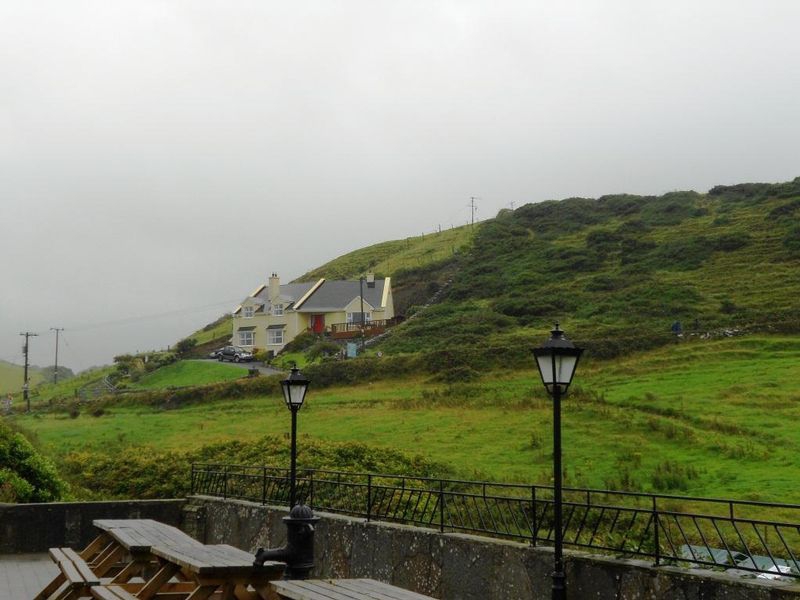 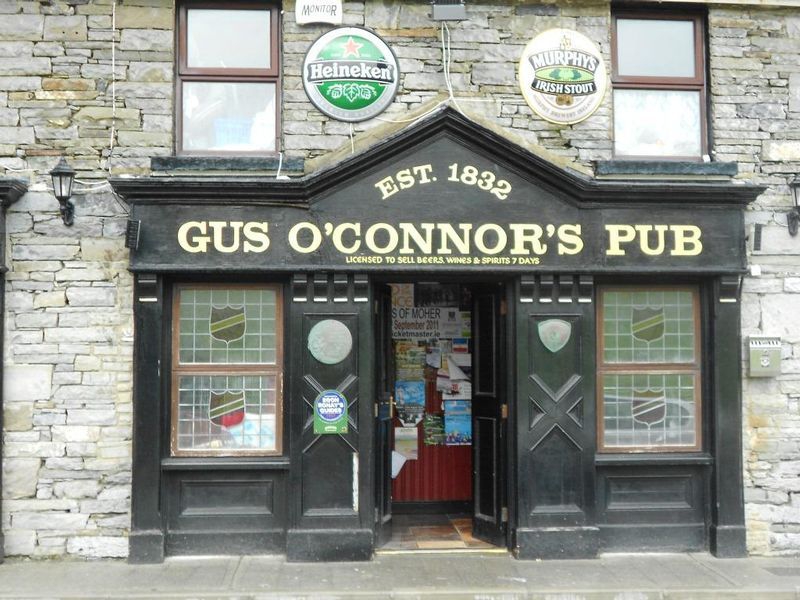 Day 1: It’s a long way from Clare to here

As the rain trickled down the airplane window and I looked out at the patchwork of fields and farms below, I couldn’t help but think that Ireland looked a lot like home. Regardless of the chiaroscuro skyline however, I held the single unwavering hope that the sun would appear at any moment, illuminating the cluster of darkened clouds. Norman, our My Guide mascot, remained hopeful too.

Landing with a light bump, or as gently as an Aer Lingus aircraft will allow anyway, we arrived into Shannon. Sandwiched between three self-contained counties and home to Ireland’s longest river, Shannon’s lower regions are geographical rich in diversity, from the rolling hills of Tipperary to the barren limestone plains of the Burren. However, for now at least, we only had our sights set on one of these Celtic regions, County Clare. A picturesque sea of jade green populated with craggy castle ruins, rugged stone walls, solitary sheep and grazing cattle, County Clare lies at the heart and soul of south-west Ireland.

In our gleaming gold automobile, courtesy of Budget car rental, we trundled along the narrow countryside lanes in search of our first activity, The Aillwee Cave. Despite our Tom Tom’s best efforts to deliver us to ‘1 Bog Road’- supposedly a real destination- we reached the Burren’s rocky plateau in plenty of time (1 hour 40 minutes, to be precise). By now Alex’s expression was beginning to wear thin, distinctly resembling a man with a boa-constrictor wrapped around his neck. Apparently nothing but endless roads, continuous rain and my singing for company will do that to you.

Bouncing back from his solitary man-sulk, we huddled under my umbrella and hiked to the top of the hill to take shelter inside the cave complex. Immediately hitting us like a surround sound setting was the low thrum of school children. Much like a swarm of bees these loud little creatures buzzed incessantly to reach their communal goal; total devastation. After a very long twenty-minute wait, and as I began to wonder what we were doing here, it was finally our turn to enter the infamous Aillwee cave. Much to my surprise however, we were greeted by an intriguing Alice in Wonderland style rabbit warren, full of sliver-like cracks, darkened caverns, dangling stalactites and sparkling stalagmites. As our tour guide regaled stories of the cave’s origins, I tried not to smile too much as the children shrieked at the pitch-black darkness.

Reappearing looking more than a little disheveled, there was simply no time for dawdling, our next stop beckoned. Renowned as a traditional Irish music capital, and visited by countless musical legends, the beautiful seaside and surfing town of Doolin awaited us. This picturesque coastal village could not have come sooner as the rain refused to release us from its relentless watery cloak. Bundling into an inviting looking Irish pub, Gus O’Connor’s, we took shelter from the windy downpour. Quite frankly, a farmyard barn would have seemed inviting at this point however, we were pleased to see that O’Connor’s had somewhat more allure. Inside, tinged by a warm auburn glow were a cluster of bustling bodies jangling their cutlery and chatting to one another, oblivious to the outside bluster. Taking the time to stock-up on some local delicacies, I tucked into some Beef and Guinness Stew while Alex, grasping his Guinness like the golden chalice, sipped the treacle-coloured liquid with wide saucer eyes. Not being much of a beer drinker myself, I have to say I was surprised by its light and smoldering flavour; like a slow-roasted coffee bean it was a rich and refreshing taste. Needless to say, we put my taste theory to the test several times over the course of the trip. Alex seemed keen to oblige. 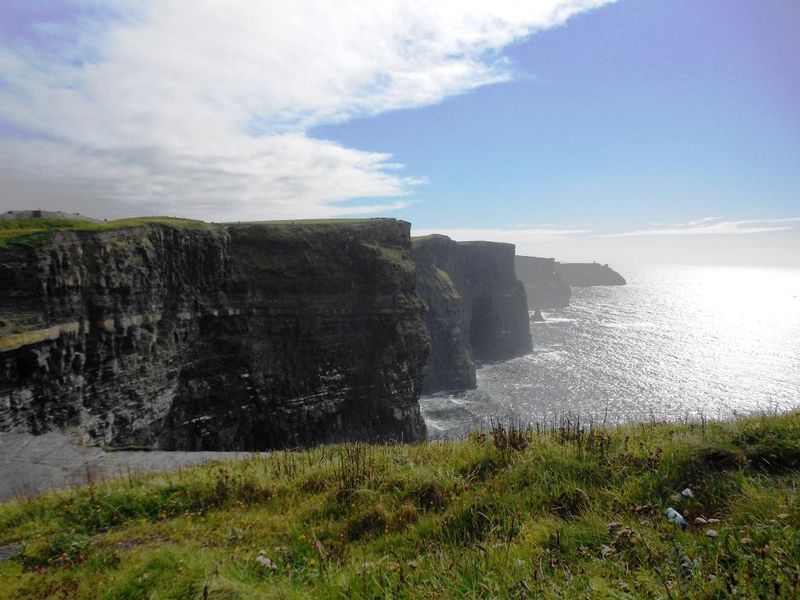 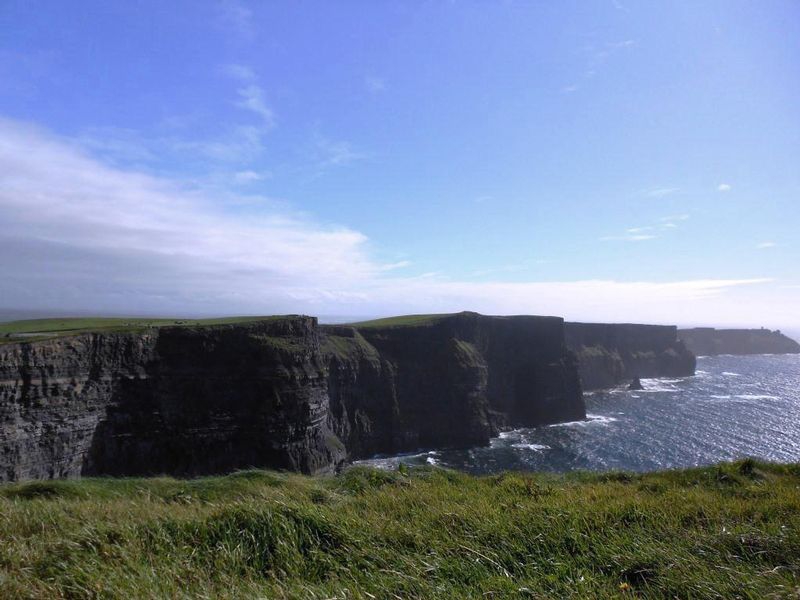 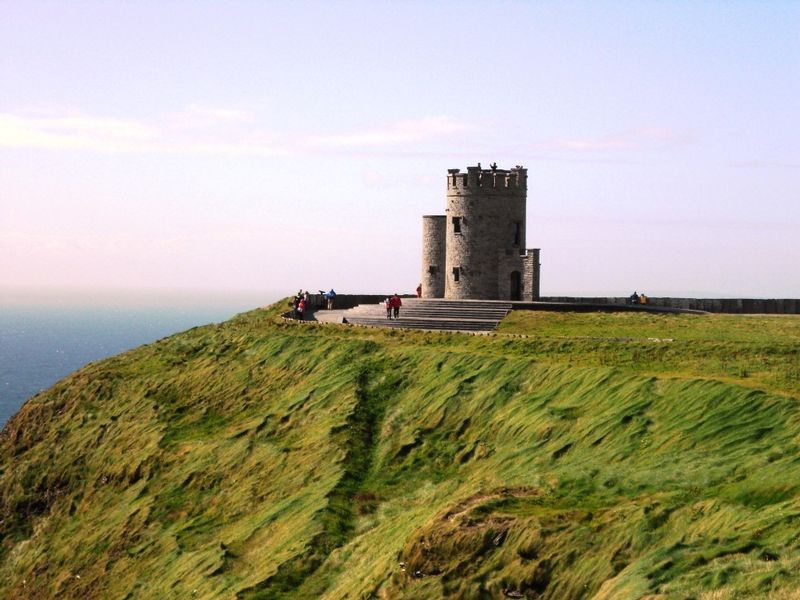 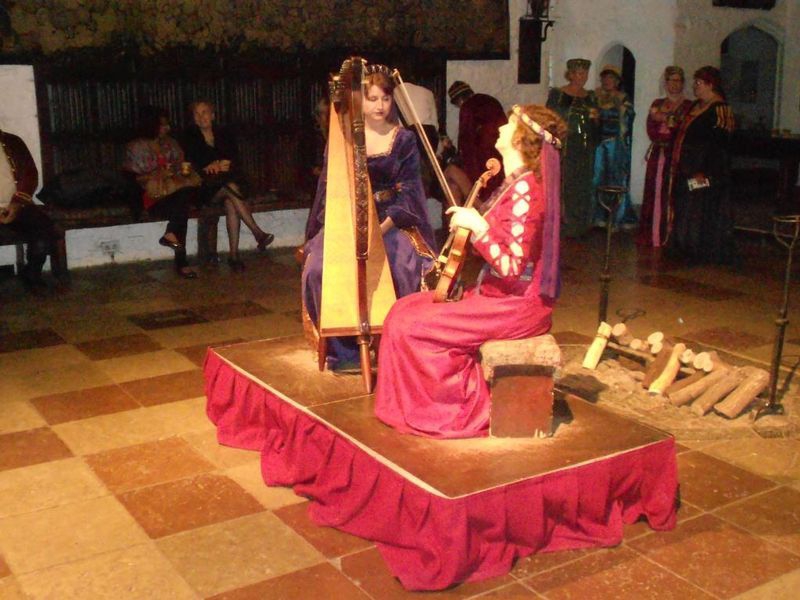 Next on the itinerary were the Cliffs of Moher, a breathtakingly beautiful geological site of jagged shale and sandstone cliffs, set against crashing coastal waters. Think the Cliffs of Dover, only darker, more looming and eerily atmospheric. Supposedly a source of inspiration for Tolkien’s best-seller ‘The Lord of the Rings’, staring at the sheer rock face it wasn’t hard to see why. Timed to perfection, as we reached the top of the cliffs to stare at the craggy chasm below and the overlooking tower, the rain subsided and a misty shimmer enshrouded us. Aside from a powerful force field of wind flattening us against the protective wall’s edge, this was perhaps one of the most magical moments of our whole trip. Alex then had to go and ruin it by making me recreate the running scene from ‘Rocky’; embarrassing videos to follow….

Back inside our trusty golden getaway we set upon the one hour journey to Ennis, the county town of Clare and our refuge for the night. Passing by boundless fields and local b&bs, when our hotel Auburn Lodge finally came into sight we both screamed in delight. Or perhaps that was just Alex. To be fair, he had spent more time at the wheel than anywhere else. My memory may have lapsed when mentioning how much of the ‘road’ our road-trip would actually entail. Whoops. Either way, the warm church-like façade of our hotel was well received. 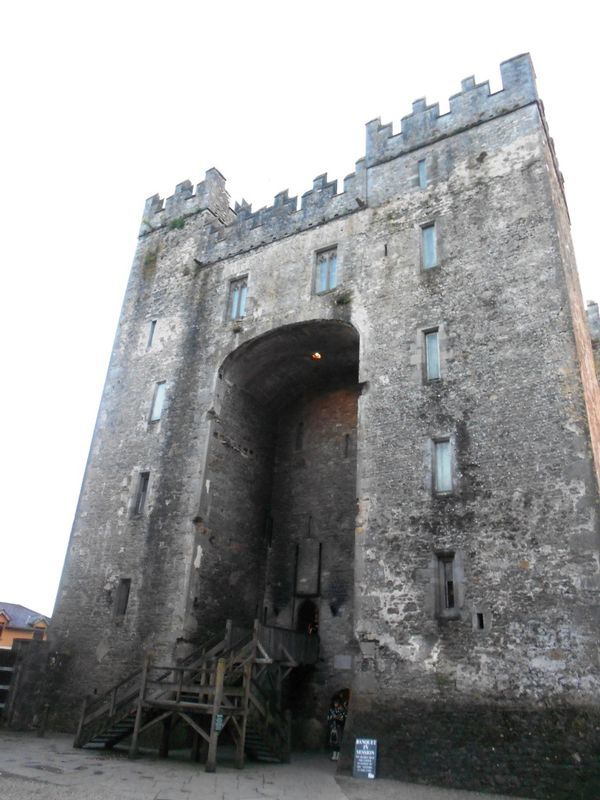 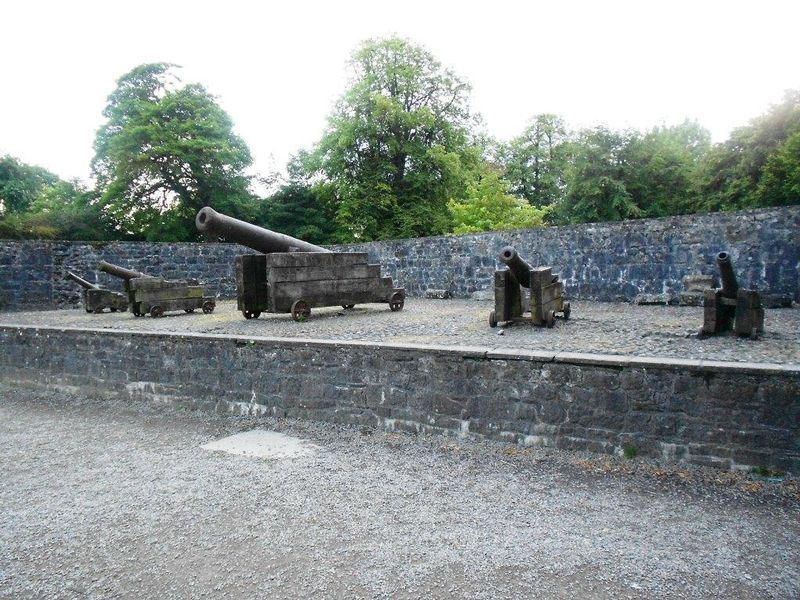 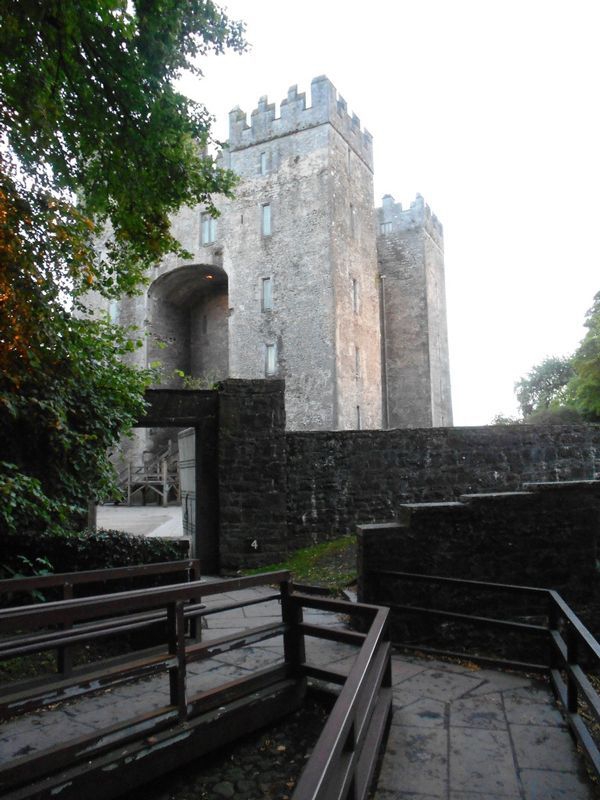 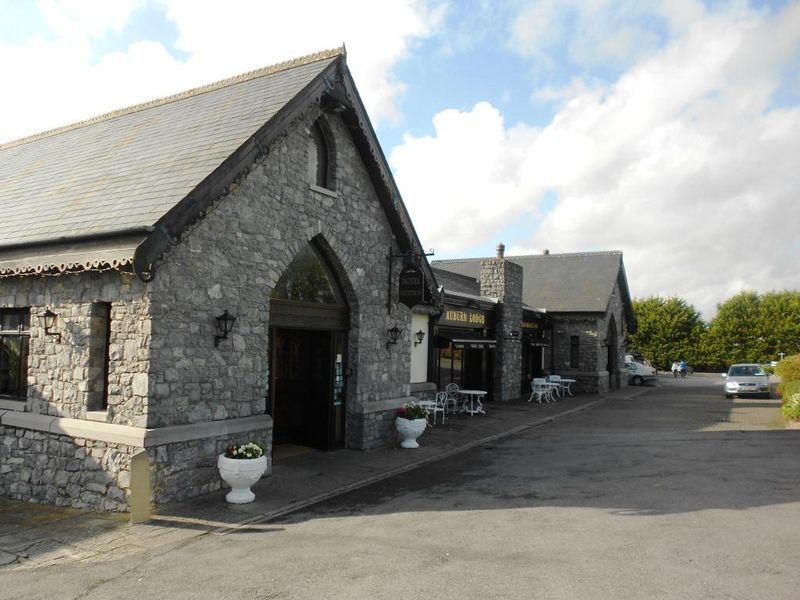 With the evening upon us, and little time to spare, our Irish franchise Gerry had arranged for Alex and I to attend a medieval Banquet. Having never attended a banquet before I didn’t know quite what to expect however, as our on the ground expert in charge of My Guide Ireland, I trusted his better judgment. Delivering us to the doors of Bunratty Castle- the best name I have ever heard - Gerry left us in the capable hands of the Shannon Heritage staff. With visions of Ratty from ‘The Wind in the Willows’ appearing, we wandered along the fortress walls to reach the castle drawbridge. Just as rewarding as Ratty himself, we were greeted by a Celtic bagpipe player who ushered us up a whirling side staircase. From there the night took a turn for the bizarre. Long medieval robes, loots and harps, spicy honey mead and sweet singing; and that was all before the banquet had even started! What ensued later was a four course communal meal (no knives and forks allowed) an appointed ‘lord and lady’ of the manor, rabble-rousing entertainment and a lot of drunken debauchery, some of which My Guide simply won’t endorse. We’ll just save that for the blog then…..

*Watch-out for the second installment of our tumultuous road trip: driving to Dublin. So as not to disappoint however, here’s just a sneak-peak of what’s in store: Viking hats, Irish jokes, Guinness, food, fairies and folklore; not bad for just another day at the office!

Create & Share Your Own 'Mini Guide to County Clare'

Part of the My Guide Network